If you haven’t heard of Love Island by now you must be living under a rock.

Forever growing in popularity, the show is designed for its contestants to find love but also win £50,000 and just like other reality TV shows it’s full of drama.

Each season kicks off by coupling up the contestants. A process solely based on looks. The men are brought in one by one to a line of women to choose who they’d like to be coupled with. They then spend the coming weeks getting to know each other, building relationships (hooking up) and creating and dealing with a whole lot of drama. All whilst trying not to get voted off by the public or forced out by new contestants breaking up existing couples.

Throughout its entire run the show content has raised concerns over the messages portrayed to its viewers, especially its younger viewers who make up over 50% of its total audience, as the contestants advertised as “sexy singles” are glamourized for their looks and behaviours. Many of whom have had multiple plastic surgeries and are lathered in fake tan and makeup. Take Megan for example, she’s considered one of this season’s most beautiful contestants however she’s spent £25,000 on cosmetic procedures such as a noise job, boob job, eyelid surgery, lip fillers and cheek fillers to become this. So rather than promoting  you to embrace your flaws as there what make you unique it is implied you should change to fit a specific standard of beauty. Coupled with the fact that the adverts running during the programme have advertised cosmetic surgeries, it’s negatively affecting how the views specifically young viewers see themselves. Bring up questions such as why don’t I look like that? And how can I look like that? And giving them the means to find out more and actively consider cosmetic surgeries for themselves. 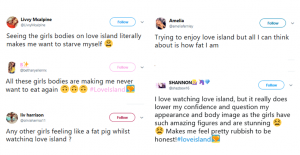 So in answer to the question: is Love Island giving young people body image issues? The answer is yes. Although the shows content will affect viewers differently, it is having a negative effect on the way a lot of people are seeing themselves and leading them to make unhealthy changes. As people feel the need to be ‘pretty and popular’.  We’re not the only ones to recognise the harm this show can in still in young people either. NHS chief executive Simon Stevens said in an interview on BBC’s Andrew Marr Show, “If you look at the increasing pressures on young people around eating disorder services, we have to think about the whole environment which children are being exposed to,”

“Some of that is social media but even if you take a show like Love Island – look at the adverts that are being shown alongside Love Island.”

He continued: “The time has come to think long and hard about whether we should be exposing young people to those kinds of pressures. Social media and advertising has got to look very carefully at the kinds of impacts that it is having.” And he’s not the only one calling for change as people have taken to twitter to voice their opinions: 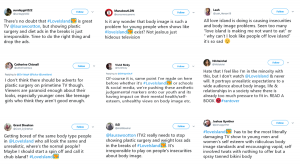 How to get involved